The geography of the Asir region and its diverse vegetation 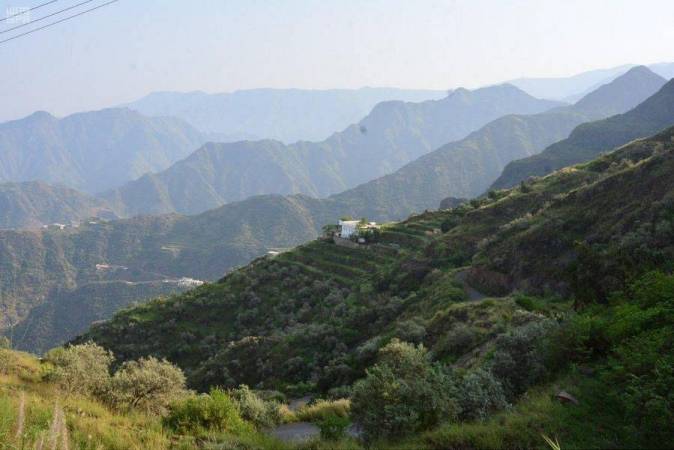 It is located over the western shield, and it formed in the third time due to the receding of the Red Sea, and reaches its peak in the south at the Yemen Plateau due to its presence in the refractive joint, and the presence of the solid plateau of the Danakel in Djibouti, which led to the barracking and direction of the north-south highlands, and the width of this belt ranges between (40 and 140) km. It is bounded on the west by the coastal plain, on the east by the plateau of Al-Jumah, then by the Hejaz plateau, then by the plateau of Asir, then by the Asir plateau, then by the Najran plateau, and these are the western plateau that surround the western highlands. The maximum height of these heights in the Kingdom is Jabal Al-Souda (3248) meters, divided on the Surat Mountains from Yemen to Al-Hada in Taif, then the Hejaz Mountains which are wider and less elevated then the mountains of Medin in the north, and each group is divided into sub-groups that can be divided into two parts from the west To the east:

It is formed by a sudden explosion towards the Red Sea, and gradually towards the east, and the peak called Al Sha'af - which is the lines of dividing water - closer to the Red Sea, and therefore the valleys of the East are wide and slow, such as environment; whereas towards the Red Sea, they are short, narrow and very fast, such as: Sabia And Bish and Jizan and others, and the reason in the height of the Sarawat that it was a dome, and when receding form protrusion edges, and during Movement of spacing and tensile pressure has occurred movement formed the highs

Terrain directly controls the environment of plants, as they determine their types. Height and slope, stomachs of valleys and plains are different environments for many types of plants, in addition to other factors, such as the type and depth of soil, and their content of organic matter, moisture, and temperature, the fact that these factors, or some of them, are the cause of the spread of species, or several types in The environment without the other, and these environments may form different groups of plants that adapt to each other, and are with other forms of life, a vital system that each needs to the other; and others are characterized by their great ability to adapt quickly in several places varying in height or proximity to the sea surface, or High temperature ECO Limited impact on the spread. While we find that for  juniper plants height is the most important factor in its growth, as well as temperature. It grows in higher places, and its growth and sovereignty increase over other groups as the height increases, so its sovereignty is almost absolute over other plants when the height reaches 3000 meters above sea level.

The forests spread in the Asir region is concentrated on the Sarwat mountain range and its eastern and western slopes, and juniper trees form the backbone of these groups because of the characteristics of this tree, which made it the most widespread, in addition to the suitability of these places. Juniper trees are perennial, up to 800 years old, if not subject to tampering and removal.

There are two types of juniper trees, the first is branched, and the second is a pyramidal shape; the juniper leaves are needle, which fall after their full age, although the tree is evergreen, and these leaves contribute to the improvement of the properties of the surrounding soil.

Forests in the region can be classified into three sections:

Juniper trees form most of these forests, and they mix with some other species, especially in places of low height, such as wild olives and tales.

Second: the western slopes and plains:

These rugged areas are very steep, they form a valley at the end, then the flat areas along the Red Sea, where olive trees are spread, and several types of acacia, and are mixed with juniper trees in high places, and with the ideals and Sidr in the valleys, where the Sidr trees are of great importance to beekeepers Because Sidr honey is one of the most expensive types. The closer to the Red Sea coast, the more dom and ark trees are multiplied, and they are mixed with acacia species, such as the Acacia ehrenbergiana and Acacia tortilis subsp. Heteracantha

These forests are tree clusters that are concentrated in the valleys and their proximity, and the gradual decline of these areas affects the spread of plant types, so the sorghum trees are mixed with juniper trees in the lower elevated places, and in the valleys, the trees of the Tamarix are more prevalent, because these plants need more quantities of water While we find Acacia tortilis subsp. Heteracantha trees, they are found in semi-arid places on the eastern plains of Sarawat Mountains Chain.

The geography of the Asir region and its diverse vegetation